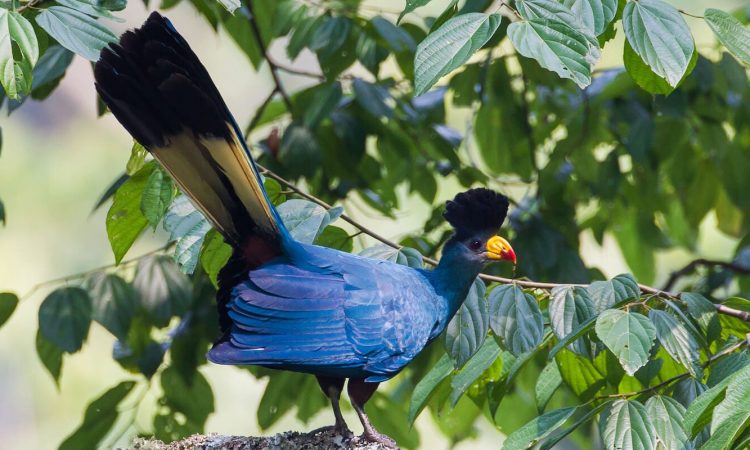 In Uganda’s north-western region, Murchison Falls National Park is the country’s largest and most visited national park, located 305 kilometers from the capital city of Kampala. For birders, Murchison Falls National Park is one of the greatest places to go in Uganda since it is home to over 450 different kinds of birds, including those that are native to the Albertine rift. It is possible to spot rare and elusive bird species in Murchison Falls game drives, a nature walk in Budongo forest, or on a boat cruise to Nile Delta and the bottom of the falls, including shoebills, the giant heron, black-headed lapwings, yellow-fronted tinkerbird and grey-headed kingfishers.

Located in Kasese, Kamwenge, Rukungiri, and Rubirizi districts, Queen Elizabeth National Park is Uganda’s second biggest national park. With over 612 bird species including water birds, woodland residents and migratory birds, Queen Elizabeth National Park has a reputation for tree-climbing lions in the Ishasha sector in the southern portion of the park. In addition to the Mweya peninsula, Kasenyi plains and Katwe region, Maramagambo woodland, Lake Kikorongo and Ishasha sector as well as the Kazinga canal and the Katunguru Bridge, the national park had a number of birding locations.

The African skimmer is one of the many bird species that you will see on your birding safari, as well as the white-tailed lark and pink-backed pelican, the papyrus Gonolek, martial eagle, black bee-eater, white winged warbler, black bellied bustard, rufous napped lark, hooded vulture, pygmy kingfisher, and the blue naped mouse bird among others.

These include observation platforms located at the salt lick and in Miriti Valley as well as Rubanga Forest and Warukiri Valley, as well as a wayside stop at Rwonyo Camp.  The Ross’s Turaco, Nubian woodpecker, black bellied bustard, papyrus Gonolek and hairy breasted barbet are just some of the birds you can see on a birding safari. Other birds include grey crowned cranes, white winged tit, long tailed cisticola, emerald spotted wood dove, red shouldered cuckoo-shrike, bare faced barbet.

En route from Entebbe airport, the Kibale forest national park is located in western Uganda, around five to six hours’ driving away. As the primate capital, it is home to 13 species of primates, including the largest population of chimpanzees at around 1500 individuals. There are habituated chimpanzees in the park that may be trekked. Chimpanzees are Uganda’s second most popular primate attraction, behind mountain gorillas, according to the Uganda Tourism Board. Kibale National Park is home to approximately 375 bird species, many of which are indigenous to Kibale Forest National Park. Some of these species include the green breast pitta and the Cassin’s spin tail.

Bwindi Impenetrable National Park is located in Kanungu district in south-western Uganda and is the most visited national park in Uganda because of the endangered mountain gorillas that live there. Every day, gorilla trekkers visit 19 habituated gorilla families in the national park, which is the only area in Africa where gorilla habituation takes place. Over 360 bird species may be found in Bwindi impenetrable national park, 90 percent of which are indigenous to the Albertine Rift, and 14 of which are found nowhere else in Uganda.

A birding paradise, it was awarded Africa’s greatest bird watching location in 2011. Many bird species may be seen at Bwindi impenetrable national park, including the broadbill, ross’s Turaco, black bee-eater and Rwenzori batis, as well as the white-tailed crested flycatcher and yellow-whiskered and grey-cheeked hornbill.

Uganda’s Semuliki National Park is located in the Bundibugyo region in the western arm of the rift valley, on the boundary between Uganda and the Democratic Republic of Congo, in the southwest corner of Uganda. There are 441 bird species in the park, including 5 Albertine Rift endemics and 46 guinea Congo biome birds that are not found anywhere else in East Africa, making it one of Uganda’s top birding locations Several bird watching spots can be found in the park, such as Semuliki River, Sempaya, Ntandi, and Kurumia Trail. For example, the white-tailed hornbill, capuchin babbler, and blue-headed crested flycatcher may all be seen on a birding expedition in Semuliki national park.

For a chance to see this highly sought-after bird, visit Mabamba Marsh. In addition to being Africa’s biggest freshwater lake, Lake Victoria is home to more than 260 species of birds. You can also see the shoe billed grebe, the blue swallow, the pallid harrier, papyrus Gonolek, the swamp flycatcher, the lesser jacana, the white-winged warbler, the Vieillots weaver, grosbeak weaver and the palm-nut vulture.

Murchison Falls National Park’s Kaniyo Pabidi and the Royal Mile and Busingiro regions south of Murchison Falls National Park’s Budongo Forest are the two main portions of Budongo Forest. It is located on the border of the Albertine Rift Valley, which protects the largest natural forest region in East Africa. A total of 360 bird species may be found in Budongo. When you’re visiting Royal Mile, keep an eye out for the shy Nahan’s francolin and Cassin’s spine tail. Be sure to keep an eye out for the beautiful chocolate-backed, blue-breasted, and African dwarf kingfishers, as well.

Be sure to keep an eye out for the beautiful chocolate-backed, blue-breasted, and African dwarf kingfishers, as well. A variety of Greenbuls may be found in the forest, including illadopsis, alethe, and a variety of Greenbuls. Yet there are plenty of more colorful species, such as the black bee-eater and the white-thighed hornbill, for people who don’t like cryptic birds at all. Ituri batis, Cassin’s hawk-eagle and brown twin spot are among the other species.

There are around 220 bird species living in the Rwenzori Mountains in Uganda. This includes 19 Albertine Rift endemics. Located in western Uganda, the mountain range has snow-capped summits that exceed 5,110m in altitudes. In the woodland zone, you’ll see Rwenzori Turaco, long-eared owls and Lagden’s bush shrikes. Other birds to look for are blue headed and golden-winged sunbirds as well as the white starred robin, cinnamon-chested bee eater, and bearded vulture, to name just a few.

Conclusion: Uganda is regarded one of the greatest birding destinations in the world, and maybe the best in Africa, despite the fact that bird tourism is not as well established or advertised as say gorilla tourism but Top 10 Birding Destinations in Uganda are worth.