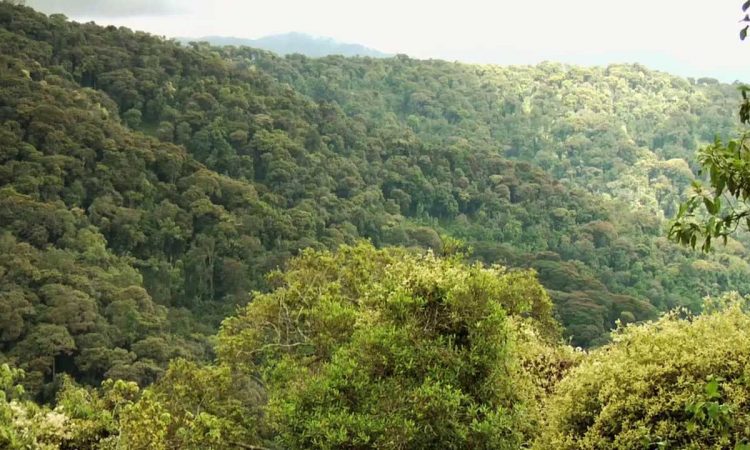 The untouched tropical rainforest of Nyungwe National Park is located in western Great Rift Valley, also referred to as Albertine Rift west valley. The untouched tropical rainforest stretches from Lake Albert to the Lake Tanganyika, and the Rift has many mountains and Lakes such as the Great Lakes of Africa which flow west into the Congo River system. Albertine rift besides having an amazing landscape, it is also known to its endemic species of flora and fauna. In Nyungwe National Park there are about 1,068 plant species, among which over 200 species are trees and 248 species of Orchids, and other new species are being found each year. There are also about 85 mammal species in, including 13 primate species which stand for 25% of all African mammals. Also, Nyungwe accommodates about 320 birds species & 29 species of them are endemics to Albertine rift which makes Nyungwe the best ornithologists’ site, as many named it birds paradise. The biodiversity of the untouched tropical rainforest in the Park is even further enriched by other landscapes including swamps, marshes, bamboo thicket, health communities, open woodland, and many microhabitats. Nyungwe is known to its 13 primate species including the famous chimpanzees, this is the best site for chimpanzee trekking and there is also the largest troop of the black and white Colobus monkey. Cyamudongo is a fragmented forest from Nyungwe and is home to the well-habituated chimps. Gisakura also has other fragmented forests where the second habituated small troop of the Colobus monkeys lives. Nyungwe has over 130km of constructed trails, which allows all travelers of the different fitness levels to enjoy its beauty, by taking in the fresh air.

Nyungwe National Park covers 1,019 km squares and it extends to Burundi and becomes Kibira National Park. Nyungwe national park’s evergreen flora to fauna (biodiversity) is dense and accommodates many plants and animals with endemic species than any other tropical rain forest. You will be amazed after seeing the huge Mahogany trees, giant ferns, and passing under a covered canopy. Also, Nyungwe national park is known and confirmed to be the furthest source of the River Nile also other Rivers that flow toward West of the Park and feed Lake Tanganyika.

Here is why Nyungwe National Park has become the untouched tropical rain forest among other rain forests. It is because during the ice age Nyungwe national park was the only one forest that was not affected, thus animals from all over the world fled and exiled to Nyungwe National Park so they evolved, and adapted to survive in Nyungwe as it was like the only place left with life for them. After the harsh time of the ice age, some creatures decided to go back to where they came from, but others chose to stay in Nyungwe National Park. Among those that stayed in Nyungwe National Park were the last of their kind from the origin place. That’s why Nyungwe national park accommodates many endemics that are shared with only other rain forests in Albertine Rift Valley. We can not forget those species that have become visitors to the Albertine Rift as some decided to stay another left for certain seasons and come back such as birds species, and plant species especially Orchids.