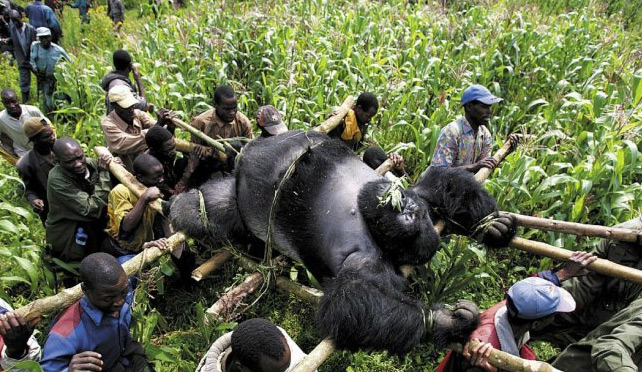 Why do poachers kill mountain gorillas?

A one renown female primatologist, Dian Fossey, advocated for the conservation of the mountain gorillas and this is said to have been the probable cause of her death from angered poachers in 1985 as her body was found lifeless and a machete in the skull. Her tomb is in the Volcanoes national park and can be visited on a Dian Fossey tomb hike whose permit goes for 75 USD.

The mountain gorillas were killed by poachers to be consumed as bush meat and this was one of the biggest and most common reasons of poaching these animals. The mountain gorillas stay in the forested parts and usually rebel groups or individuals seeking refuge tend to share this space with them. They hunted them down as a survival skill and this is majorly in the DR Congo’s Virunga national park.

The elite and wealthy in society let poachers abduct the mountain gorillas and caged them to keep as pets in their homes or their zoos and even in research centers. The mountain gorilla cannot thrive long in captivity and this eventually led to their sooner than supposed to be death.

The poachers were later on rewarded with large sums of money and this attracted many of them to want to join the business.

There were also some accidental mountain gorilla killings where a mountain gorilla got trapped by a snare that was set for another animal and if they were not found early enough or left badly injured, would eventually lose their lives.

Some gorillas also lost their lives in the conflicts in the area and stray bullets in the wars claimed some lives. This was a common in the areas of Rwanda and the Democratic Republic of Congo.

Some poachers killed the mountain gorillas as they saw them as a threat and were competing with them in the area and to stay safe. The mountain gorillas would sometimes move to the areas closer to the human settlement and this is when they would face their fate.