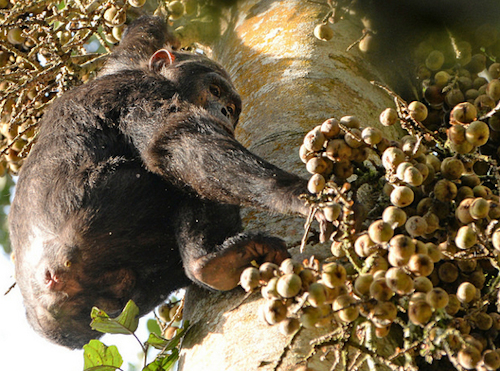 Chimpanzees in Nyungwe National Park are an amazing primate species that have different behaviors and ways they adapt to their habitat in the forests. Rwanda is one of the countries that make it easy to trek primates such as mountain gorillas and chimpanzee but trekking mountain Gorilla is the popular activity which is also somehow expensive compared to other activities.

Where to find chimpanzees

The chimpanzees occupy a different kind of habitats, such as forests, grasslands, deciduous woodland, and mountainous regions. They are found in Central Africa and West African forests; in Rwanda. They are only found in Nyungwe national park (tropical mountainous rain forest) in the Southwest of Rwanda. Chimpanzees are mostly found in the area with plenty of fruits, as most of the time, they feed on fruits and leaves. They also feed on termites, ants, honey and beyond that, chimpanzees are carnivores. In Nyungwe National Park, the first predator of Ruwenzori Colobus monkeys is chimpanzees.

Adaptation is described as behaviors or physical characteristics that are developed by living things in the purpose of surviving in the given environment. For example, some animal species and their adaptations include webbed feet by aquatic birds, hump by Carmel, and changing colors by Chameleon.

Chimpanzees have developed physically in their adaptation such as having four fingers and a short opposable thumb. This allows them to grasp or grip the branches. This opposable finger helps them in the feeding also like holding the stone while breaking nuts, holding sticks while harvesting honey, also using sticks while having termites from the mound. Chimpanzees in Nyungwe national park are sometimes found using leaves to clean themselves.

Chimpanzees have also developed a physical adaptation of long and sharp canine teeth. The teeth help them in scaring way the competitors and enemies, but also tearing so fast and easy the prey like other small primates, rodents, and some birds.

Chimpanzees intelligently defend their territory and they never stay or spend a long time in one place. They are always changing places. They also use tree leaves, wigs to build up a nest in the top of trees where it is not easy to find them. When you come for chimpanzee trekking in Nyungwe national park you may see chimpanzees in their nests if you come early. That is why coming earlier is advisable so that you maximize your experience.

Facts about chimpanzees in Nyungwe

Chimpanzees are among the intelligent creatures in the world and they may be the second to humans according to the research. Chimpanzees are the only creatures that are easily adopted, trained, and they learn fast. They have been adopted and trained chimpanzees seen doing home activities such as cleaning, having a cup of tea together with their family, dressed up and imitating one’s behaviors.

The actions of chimpanzees naturally have been linked to human actions according to their mental evolution, thus, chimpanzees were proven to be the closest relative of a human than any other primate species, like monkeys or Gorillas. So never confuse chimpanzees with monkeys because they are not monkeys, but chimpanzees and Gorillas are both in the same family and are both Apes besides Bonobos, but chimpanzees are close relatives to human beings than any of the Apes. Like chimpanzees, they are found in tropical forests and they have long arms than legs, black long fur on the whole body but with a bare face, ears, fingers, and toes. They share with humans the opposable thumbs to other fingers, and this allows them to grasp sticks, stones and to be able to throw a stone to break fruits or fight against enemies. The life span of chimpanzees is about fifty years but in captivity and they may live up to sixty years. In their parenting system, the newborn will stay with its mother until five years after birth. Chimpanzees favorite food is fruits but they also like leaves, insects like termites, ants, honey and small rodents and that’s why; they are omnivores. These primates’ first predators are a human, leopard, big eagles, and diseases from humans; also they are used to in laboratory for the test of medicines. Chimpanzees are most of the time on land and in trees eating but the rest of the time they nest and sleep in trees. Always chimpanzees will start their activities in the morning early and mid-day as they are grooming but on the other side they are active during moonlight in the night. Chimpanzees are among the animals that are in continuous extinction at a high rate so they are endangered species on the EUCN Red list. The cause is many like clearance of forests, hunting for meat, and taming them.

Chimpanzees communicate with each other by beating the giant tree called Newtonian. They do that often when there is a danger to be caution.

All the seasons are advisable to trek chimps in Nyungwe and there will not be the wrong season when it comes to chimpanzee trekking. Although the best time is early morning in the dry seasons since the trails are usually dry enough.

When you are on the chimpanzee trekking safari in Nyungwe, there are a number of lodges and hotels around the park where one can stay including Kitabi eco-center, Kccem Guest House ( both are budget), Nyungwe Nziza lodge ( medium accommodation), Gisakura guest house (budget), One and Only one Nyungwe House (luxury), and Nyungwe Top View Hotel (medium).