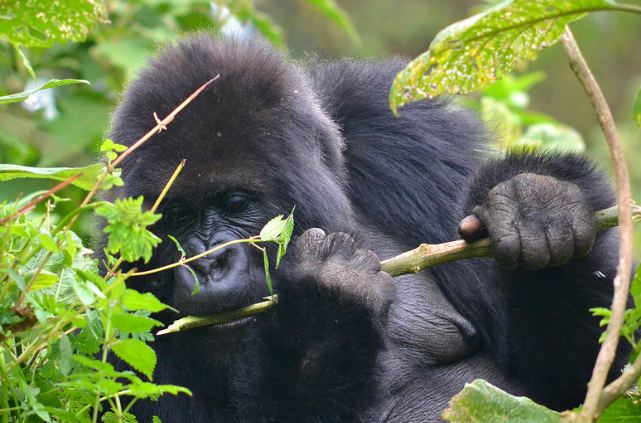 Volcanoes National Park Rwanda is one o the national parks that are located in the Virunga Ranges that harbor the remaining species of mountain gorillas in the world. Rwanda is a landlocked country located in East Africa bordered by Uganda in the north, Tanzania in the east, Burundi in the south and Democratic Republic of Congo in the west with the capital city called Kigali. Rwanda is rich in wildlife biodiversity which is found in the three national parks namely Akagera national park, Nyungwe national park and Volcanoes National Park which is the most visited park and top tourist destination in Rwanda. Volcanoes national park also known as Parc National Des Volcans in French and is the oldest national park in Africa which was established in 1925 to protect or conserve the endangered mountain gorillas which were facing extinction due to poaching. Volcanoes national park is located in a small village called Musanze covering 160 square kilometers of the Rain forest, bamboo forest and grasslands in the northern part of Rwanda and borders Mgahinga National Park in Uganda and Virunga national park in the Democratic Republic of Congo.

Volcanoes national park is located in the great Virunga conservation area and harbors five to eight volcanoes of the Virunga mountains including mount Karisimbi, mount Bisoke, mount Sabyinyo, mount Muhavura, mount Gahinga among others. Volcanoes National Park Rwanda is a home of over 178 bird species with 29 endemics to the Rwenzori Mountains and Virunga conservation area with animals like bush pigs, forest hogs, buffaloes, black-fronted duiker, bushbucks, spotted hyenas, endangered golden monkeys and mountain gorillas hence making it the national park with the highest number in the Virunga conservation area. Volcanoes National Park Rwanda has a number of activities which the tourists can engage in including gorilla trekking which is the most done activity in the park, mountain hiking, bird watching, nature walks, cultural encounters, hike to Dian Fossey tombs, baby gorilla naming among others which are run by Rwanda Development Board.

Volcanoes national park is located near the village of Kinigi which is approximately 12km north of Musanze, 130km from Kigali to Gisenyi and about 105km from Kigali international airport. The park can be accessed by both road and air transport, by air you can land in Kigali international airport and take a two hour drive to the park and by road you can either use public means of transport which include buses that move between Musanze and Kinigi then connect to the park by private means which takes around three kilometers or use private means of tour company vehicles from the airport to the park. Activities in volcanoes national park start very early in the morning at 7:00 am and therefore visitors should be at Kinigi park headquarters for a briefing before taking part in any activity.

Mountain gorilla trekking, mountain gorillas are the most famous attractions in Volcanoes National Park Rwanda which involves moving and exploring into the forest following fresh gorilla leads or where the gorillas slept the previous night and take about one to six hours depending on where the gorillas are located. Gorilla trekking in volcanoes national park starts in the morning at 7:00 am with a briefing at the park headquarters about the expectations of gorilla trekking and each gorilla group can be seen by a maximum of 8 people per day and visitors are allowed to spend 1 hour in the presence of the gorillas once found taking photos, videos, learning about their habits among others. Volcanoes national park is a habitat of ten gorilla families including Susa family, Amahoro family, Sabyinyo family, Ugenda family, Hirwa family, Umubano family, Karisimbi family, Agashya family, Kwitondo family, and Bwenge family with  silverbacks as the adult dominants of the groups which offer protection to the families, settle disputes, determine when and where to feed among others. During gorilla tracking in volcanoes national park you can also spot other wildlife species like birds, animals like bushbucks, bush pigs, forest hogs among others hence making gorilla tracking interesting and rewarding and Gorilla tracking permits in Rwanda cost $1500 per person which can be booked in advance.

An adventurous hike to Dian Fossey Tombs, this is a hike that takes about five to seven hours and 30 minutes from the park headquarters to the tomb of the late Dian Fossey an American primatologist who spent close to two decades in the park studying the mountain gorillas. Dian Fossey established Karisoke scientific research center between mount Visoke and mount Karisimbi which is found at an altitude of 3000m and was established to conserve mountain gorillas in Rwanda. She was murdered by poachers in 1985 and her grave is nestled between the volcanic peaks of Bisoke and Karisimbi next to her favorite gorilla friend Digit. Much of her work is portrayed in a movie titled Gorillas in the mist and was shot in volcanoes national park. The research center is a gorilla graveyard that has about 200 gorillas which were killed by poachers and natural causes. During the Dian Fossey hike you will be able to see wildlife species on the way including animals like buffaloes, bird species, some elephants if you are lucky, golden monkeys, mountain gorillas among others.

Bird watching: Volcanoes national park Rwanda is a birding destination in Rwanda where you get to spot different bird species. Bird watching in the park is done in the bamboo forest, It is a home of over 200 bird species with unique species that are endemic to the Albertine rift valley and hard to find in other areas including the Rwenzori turaco, Rwenzori batis, Rwenzori double collared sunbird, collared apalis, handsome francolin, red-faced woodland warbler, strange weaver among others which makes your safari in Volcanoes national park fascinating.

Guided Nature walks, this is an activity in Volcanoes national park where visitors move on foot with park rangers to different areas in the park and can also be done using bicycles.

The popular walk is the trail to Musanze caves which leads you into the rain forest and the underground caves that were formed due to volcanic eruption hence forming a large space where humans enter following stairs and walkways in the dark interior to appreciate geographic nature. Musanze cave is a 2km long cave in Musanze town and adjacent to the Volcanoes national park and takes about two hours from the park headquarters to Musanze cave. The cave has great scenic views of bamboo forest, montane forest, and grasslands hence giving visitors a great experience.

The Buhanga sacred forest walk which is the small traditional forest where the local kings of Rwanda bathed during their coronation, therefore, people who lived around refused to cut down trees from that forest and to cultivate the farmlands nearby hence becoming the sacred forest. The forest gives visitors a historical experience which is interesting.

Nature walk to Nyange community the cultural village on the edges of Volcanoes national park Rwanda where the visitors get an interaction with the people in the community about their village lifestyle, visit homesteads of ironsmith, basket and mat weavers, carpenters, local beer brewers, cultural performances by the Ibylwacu cultural group, Kinyarwanda dances, traditional dishes, see traditional houses, bow and arrow shooting, drumming among others which provides great experience about the Rwanda cultures.

Mountain hiking, Volcanoes National Park Rwanda has over five volcanic mountains which give a great experience to hikers on Rwanda safaris they include

Mount Bisoke which is an active volcano is 3700m above sea level with a deep crater lake on the top and takes 7 to 8 hours to reach the top hence needs someone who is physically fit due to its length and its high elevation. Mount Bisoke hiking starts at 7:00 am where the visitors meet at the park headquarters for briefing and provision of a guide and hikers are advised to take a porter for support during the hike. Mount Bisoke is covered with thick rainforest and bisoke foothills are a home of gorilla families and Karisoke research center where the gorilla habituation process started.

Mount karisimbi is a dormant volcano located along Rwanda and the Democratic Republic of Congo on the western rift valley is the second tallest volcanic peak in Virunga ranges and the sixth highest mountain in Africa after Kilimanjaro, Mount Kenya, mount Rwenzori, mount Meru and Ras dejen in Ethiopia. It is 4507m above sea level and takes two days to reach the top where you will enjoy a great view of the five volcanoes and twin lakes. Mount Karisimbi derives its name from Amasimbi which means white shell due to the white-capped summit on top. Mount Karisimbi is a habitat of mountain gorillas, forest birds, beautiful landscapes among others which is a rewarding hike for the visitors on a safari in Volcanoes national park.

Twin lake hike, these are lakes namely Lake Burera and Lake Ruhondo which are also similar to Lake Bunyonyi in western Uganda due to the great scenic sighting. Hiking on the twin lakes takes 3-4 hours and is free of charge. While at the twin lakes you will be able to see the Virunga volcanoes and also take a canoe or boat cruise at a cheap price for great scenic viewing and to spot some wildlife species around the lakes, take beautiful photos among others.

Baby gorilla naming also called Kwita-Izina Rwanda gorilla naming ceremony, this is an annual ceremony that is held to celebrate the birth of new members in gorilla families in Rwanda, the ceremony organized by Rwanda Development Board and is always accompanied with community projects, educational programs, conservation workshop and exhibition, music, songs, storytelling, drama, eats, drinks and a theme for the ceremony. Gorillas live in families and each individual in Volcanoes national park has a data bank with records of names, age, gender, family, biological parents, characters, health status, deformities,  likes among others and the tracking teams visit particular families in the forest to take records and when a baby gorilla has been produced the baby gorilla naming ceremony is held. During the ceremony, the Rwanda Development Board selects international celebrities with an attachment to wildlife conservation to participate in the naming of baby gorillas hence making the ceremony exciting to visitors in Volcanoes national park.

Volcanoes national park has a wide range of luxury and midrange accommodation facilities which make the visitors safaris in Rwanda comfortable and they include Five Volcanoes boutique hotel, Mountain Gorillas nest lodge, Sabyinyo silverback lodge, Best view hotel, Vinci gorilla lodge, Mountain Gorilla view lodge, Gorilla solution lodge in Kinigi sector, Hotel Muhabura located in Musanze, Virunga lodge among others. Accommodation facilities offer meals, a conducive environment for relaxation, great scenic views of Volcanoes national park, twin lakes, vegetation types in the park among others for visitors to relax and enjoy the Rwanda safaris. Volcanoes national park can be visited throughout the year and the best time being the dry season between June to September and December to February because the trails for hiking and trekking will be dry and passable.

From the beautiful scenery one enjoys in Rwanda, a visit to Volcanoes National Park Rwanda not only offers great scenic views, numerous activities and first-class accommodation and meals at the various hotels. The tranquility in the national park, serene weather and the thrill of catching a glimpse of a golden monkey or a mountain gorilla in the park, is incomparable and therefore something one needs to experience firsthand.